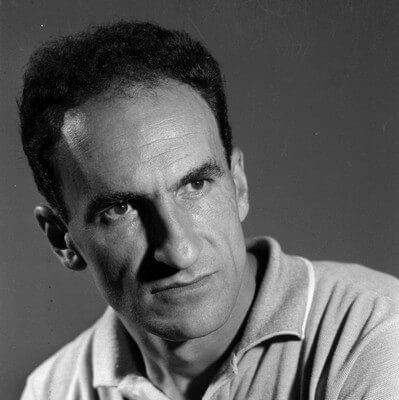 ‘If normal changes, we will all change with it. I don’t know if society’s mindset is easy to change. Maybe something will change for the better. If it gets worse, it is better not to change.’

Eduardo Chillida Juantegui was a sculptor of Spanish Basque origin. He started his career as a professional football player but after he sustained an injury he was apprenticed to a local blacksmith and industrial forges along the Basque coast. As a result, he developed into a skilled blacksmith. In Madrid, he switched his occupation to study architecture (1943-1946).

Three years later he moved to Paris, where he studied drawing. That same year, his work was exhibited at the Musée National d’Art Moderne. In the Louvre he was inspired by Greek sculpture. Initially, he made sculptures with traditional materials such as wood and alabaster. Soon after he returned to his hometown of San Sebastian, he started exploring the use of steel.

He gained international recognition with the Grand Prize at the Venice Biennale in 1958 and through his repeated participation in Documenta (1959 to 1977) in Kassel. Additionally, his retrospective exhibitions in New York, Münster, Frankfurt am Main and San Sebastian also contributed to his success.

Chillida concentrated on the human form- mostly torsos and busts made of stone- later the images became more abstract and massive. He was inspired by the rugged but endless Basque landscape, especially the rocky coastline in his native region. His work was monumental and often placed in public space, made possible by the use of concrete and Corten steel. Works by Eduardo Chillida can be seen in sculpture parks all over the world: in Europe (the UK, Spain, Germany, France) and beyond (the US and Japan).

Chillida passed away in 2002 in his hometown of San Sebastian. Two years earlier, Museum Insel Hombroich exhibited one of his last works: Begirira.