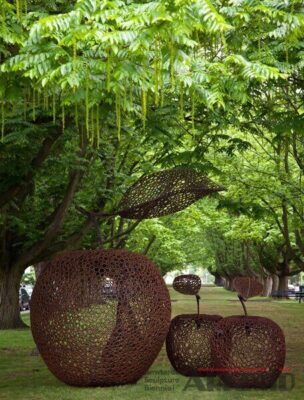 More about the artist

Frédéric Beaufils is a draftsman and sculptor who primarily works with metal, but also on occasion with wood, concrete and even asphalt. Beaufils has a background in electromechanics and debuted at the age of 21 with his plastic work. He experiments with epoxy resin, metal and plaster. Further along in his career, he composed enormous sculptures of metal rings that he welded together. That became his trademark; he makes large objects that represent human figures, trees and fruit. Nature is his main source of inspiration. Thanks to the assembly of different types of pipes and other metal parts, Beaufils plays with volumes, light and transparencies. Ethics and ecology go hand in hand for him. He recycles materials such as heating pipes.

In the early 1990s, he travelled outside of Europe to Mauritius, the United States, Togo, Benin and Ghana. In 1993 he made ‘The Dreamer’ and a year later an installation in a barn in the Ardèche. It is a creation of wood and stone. Beaufils’ work took more than nine years to complete; 729 ballpoint drawings of the work can be seen in the public library in his hometown Rambouillet.

In 1995 he returned to Paris to make more iron sculptures. He started with a monumental five-part series, including ‘The Mountain’. Shortly afterwards, he met a Japanese Aikido master who introduced him to his method for 8 years. In the early 21st century, Beaufils spent four years in California, Mexico and Togo. In Togo, he built a hut and a well on a beach near Lomé and built a house for tree planters in a mountain village. He completed his work there and returned to France in 2004. He lived and worked alternately between Paris and the Haute Garonne. Since 2007, he has lived and worked near Versailles, his native region.