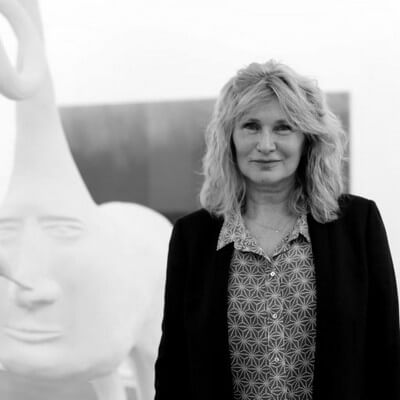 ‘Like all artists, I am inhabited by what I want to express. So when I think about an artwork, I first have an idea. Some media will express it better than others, but then it’s a real encounter with the material.’

Gloria Friedmann is primarily a sculptor, but also an installation artist, performer, painter, draftsman, video artist and photographer. She is self-taught and left for France in 1977. Three years later she was invited to participate in the Paris Biennale and in 1987 for Documenta 8 (Kassel).

She combines the deliberately changeable aspect and caustic spirit of her approach with seriousness, which she cultivates in a way that is both sophisticated and funny. In the early 1980s, she gained recognition for her installations and performances about “non-human” nature. Winter Landscape (1986), for example, is the result of a poeticization of the lexicon of minimal art like that of Arte Povera. Friedman develops his own logic with raw and unconventional materials, such as irony and parody.

Long before it was contemporary, Friedmann was very concerned with demonstrating links between man and his environment. She expresses this not only through the classical dialectics, such as nature versus culture but also through the representation in material forms. Matrix (2015) is a good example of this. It is an ungraceful and anthropomorphic form that – perhaps – is floating or on the verge of falling, and carries a heavy sphere. It is too heavy for an individual, too big to carry.

In addition to Germany and France, she also exhibited in Moscow. Friedmann lives and works alternately in Aignay-le-Duc and Paris.