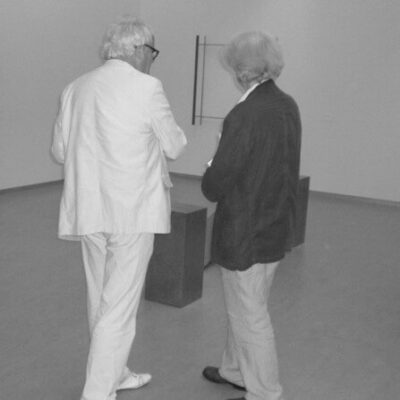 ‘An image consists of the same space as yourself, it is present like the human figure and is measured by its own size.’

Jan Maaskant is a dutch sculptor and draftsman. He became acquainted with the work of Paul Klee at the Academy of Fine Arts in Rome. What strikes him about it is the interaction between form and space.

As a sculptor he is self-taught and was initially influenced by Constantin Brâncusi, Henri Laurens and others. His closed sculptures gradually became more open and composed as independent elements, in which size, distance, direction and layout play a large role.

Maaskant extrapolated a relationship with the geometric-abstract, minimalist and systematic developments of the 1960s and 1970s. He used grids, repetitions and shifts, but almost always disrupted them through personal intervention. As a “neo-structuralist” he addresses the immeasurability of individual motifs in larger structures. Maaskant tries to unite architecture and sculpture in his work

Objective reality and individual myth become intertwined in Jan Maaskant’s work. He made many reliefs, which allowed him to work on a wall without being disturbed by a room or place outside. By creating space between relief and wall, the heaviness was reduced and the object acquired a certain neutrality.

In 1982 Jan Maaskant was selected for Documenta 7, but eventually dropped out. Three years later he became a sculpture teacher at the art academy in Kampen. In the summer of 2017, Maaskants ‘Connectie III “like roses” and The space’ was exhibited during ARTZUID.

Maaskant’s work is in the collection of, among others, the Museum Boijmans Van Beuningen in Rotterdam, the Kunstmuseum in The Hague, the Van Abbe Museum in Eindhoven and the Kröller-Müller Museum in Otterlo.