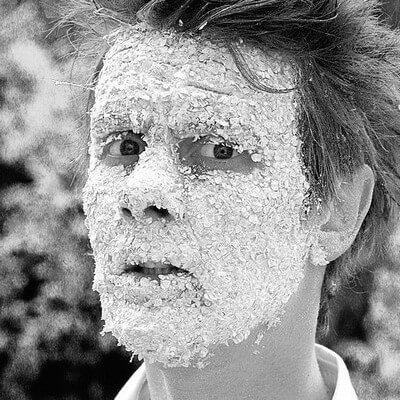 ‘The best performance is the one in which I evoke different emotions- love, hate, horror. And that people then think it is dangerous.’

John Bock studied in Hamburg and is a multi-media artist. He gained international recognition for his film and video work, installations and theatrical performances. He often works with international actors from his hometown of Berlin. An example of his absurdist visual language is FischGrätenMelkStand for the Temporäre Kunsthalle (Berlin). A bizarre and exciting environment for presentations by forty artists, with an inverted log cabin and a burnt pizza base hanging from the ceiling.

Since 1991 he has been creating handmade or remodelled objects from found materials, which act as symbolic settings for his ‘lectures’. These are divided into scenes in which actors, pop songs or classical music play a role. He performs with clothes, appliances and plastic diagrams, illustrating his mathematical explanations. These ‘lectures’ are largely recorded on video, which is then integrated into an installation. Afterwards, the objects remain on the stage and form a theatrical collage.

In a ridiculous film, John Bock paints a picture of a cook who loses control over his own creation with a lightning-fast jump-cut montage. He is besieged by herrings, smeared with ketchup and a disgusting spaghetti is created.

In 2013 Bock applied his slightly absurdist view of the world to the Hindelooper Kamer, which has been housed in the Fries Museum since 1881. In the 19th century, this room was seen as an icon of authentic Dutch primaeval culture. Today it’s an icon of cultural dynamism: elements from other, distant countries that people make their own and in turn pass on. He has had solo exhibitions in New York (MoMA), Berlin, Basel and London. He has also participated several times in the Biennale in Venice and Documenta in Kassel.

For ARTZUID 2013 he made the artwork Wopper-Pi-Bean.