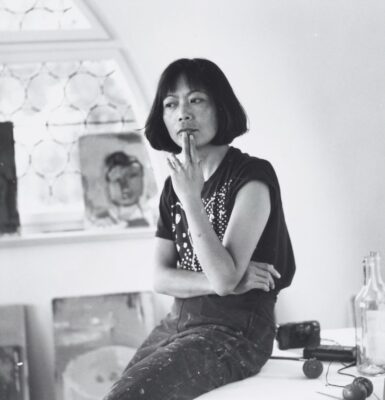 ‘I had a cat, but now the cat is in me, many cats, also a dog and many other animals.’

The Japanese-Swiss Leiko Ikemura is a sculptor and painter. She studied at the University of Osaka in the early 1970s, after which she left Japan to study in Spain at the Academia de Bellas Artes in Granada and Seville. In 1979 she moved to Zurich, where she would live and work for four years.

Her first solo exhibition took place in 1983 at the Bonn Kunstverein. That same year she stayed as an artist in residence (Stadtzeichnerin) at the invitation of the city of Nuremberg. Over the following years, Ikemura had numerous solo exhibitions in galleries and public institutions in Basel, Melbourne and Cologne. During this period, her work showed affinity and parallels with the neo-expressionist Neue Wilden in style and violent themes. Her interest in sculpture arose in 1987. In the 1990s, the female figure developed as the main focus of her work. For example, she made a series (Girls) with immature bodies and hazy facial features. In 1991 she became professor of painting at the Universität der Künste in Berlin.

In addition to the focus on female figures, more hybrid figures emerged: woman/animal, woman/mountain, woman/tree. After the disaster at the Fukushima nuclear power plant in 2011 and reports of birth defects in animals, Leiko Ikemura created Usagi Kannon (Rabbit Madonna). This bronze hybrid with a crying human face and rabbit ears made a striking appearance during ARTZUID 2021.

Take a look at the webshop