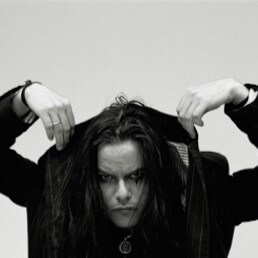 ‘Creativity and inspiration never lead to a completely new idea; art is not ‘tabula-rasa’. Rather it stems from previous ideas, utopias, concepts and mistakes.’

Marc Bijl studied at the Academy of Art and Design in Den Bosch and at the Rennie Macintosh School of Art in Glasgow. He lives and works in Berlin. His work consists of sculptures, paintings, installations and music. He likes to play with opposites (plus v.minus, inside v. outside, good v. bad). This can be seen, for example, in his work that depicts a burning peace sign.

In his work, Bijl refers to figureheads of modern art such as Piet Mondriaan, Mark Rothko and Barnett Newman. But instead of Mondrian’s black lines, red, blue and yellow areas in Victory Boogie Woogie, Bijl has cut away a strip of cloth in all four corners, revealing the metal stretcher of Power Structure (after Mondrian).

His investigative, critical and questioning method with regard to society and its visual culture has earned Bijl the title ‘anarchist’ artist. His research takes place both in his studio and on the street. Social issues and the use of symbols and rules form the basis of his work. He responds to global themes and symbols of political power, globalization, religion and nationalism. Interventions in public space and videos underline or undermine his perception of the world. An example is the work TERROR which Bijl sprayed during Documenta 11 (Kassel) on six pillars of the Fridericianum, a letter on each column.

In his work, Bijl alternates between street culture and political activity, as he does between images, text and music. While his early work is cartoonish often textual and representative, his more recent work is increasingly abstract and minimalist. The crux is no longer symbolism but what that symbolism means and represents. He also refers to modernist art icons such as Rothko, De Stijl, Kounellis and Beuys.