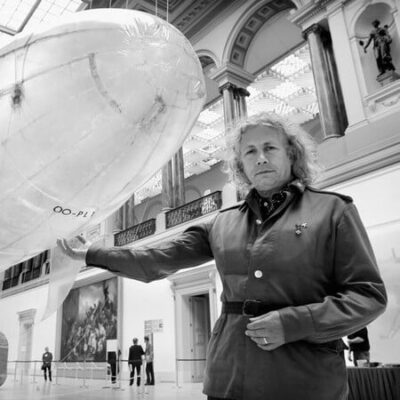 ‘I would have liked to travel to the stars, but it’s not possible, those gravity problems.’

Panamarenko was a sculptor, whose real name was Henri Van Herwegen. His artist name was a combination of the words Pan American Airlines and Company. He is considered one of the most important Belgian artists of the second half of the 20th century. He made many assemblies related to flying.

As a child he discovered spatial constructions and technology; his father was an electrical engineer and his grandfather an architect. Panamarenko studied at the Antwerp Academy from 1955 to 1960 and had his first exhibition there in 1963. Not much later he organized ‘happenings’ in the public space together with Hugo Heyrman, Bernd Lohaus and others.

For some time he leaned against pop art and fell under the spell of self-powered flying and airplanes. He created scale models in surprising shapes of imaginary airplanes, balloons and helicopters. The question of whether these can actually fly is part of the mystery and appeal. In fact they are variants of the mythological figure Icarus.

Panamarenko also made prehistoric birds, such as the Archaepterix (“intelligent chicken”) 1990, and submarines (Pahama Novaya Zemblaya, 1996). He made his international breakthrough and had several solo exhibitions. In 2002 he opened his new studio, the Antwerp Airship Building. Three years later he retired as an active artist.

The first edition of ART ZUID (2009) showed Panamarenko’s sculpture Brazil, an immense bronze sculpture of a man figure running up for an air jump.

He donated his former home and studio to the Museum of Contemporary Art Antwerp. According to Panamarenko’s wishes, a helipad was installed on the house. Not with the intention that helicopters would actually land on it, but as an homage to his love of plains and flying objects.