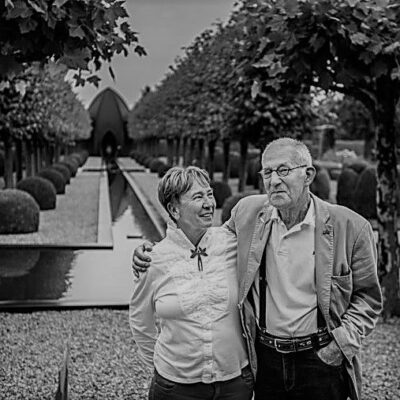 ‘We are two completely different people, but because we spar so intensively, we have grown towards a universal view of man and the world.’

About Adelheid and Huub Kortekaas

Huub (1935) and Adelheid (1947) Kortekaas have been an artist duo since the late 1960s and are self-taught. They decided to follow their hearts and develop their own universal visual language. In their view, we are part of nature. The plant became the symbol for man who grows from the dark earth to the light.

From 1995 they developed the Tempelhof in Winssen, a total work of art and a reflection of the world in which art, architecture, garden, living and working come together. The ‘physical measure of man’ served as a source of inspiration and guidance. It is a symbiosis of illusion and reality, fiction and truth, heaven and earth, nature and culture, East and West, and economics and spirituality.

In the early 1970s they made a group of abstract Angels, in which the influences of Constantin Brancusi and Henri Moore are clearly visible. They depict the field of tension between the masculine and the feminine. But first and foremost- we are human.

Over the years they have worked on projects as diverse as Anima Mundi, the Alphabet of Architecture, Icons, and the Peace Symbol after the 9/11 attacks. In 2012, they expressed the philosophy behind their work in Utopia: life as a work of art, a manifesto.

During ARTZUID 2021, one of the polyester Angels of the first hour (1971) stood at the beginning of the Apollolaan. The idea of ​​the angel arose earlier, in 1967, that of the Angel/Human dates from 1999: the Anima Anumus is both transmitter and receiver, in the field of tension between heaven and earth.