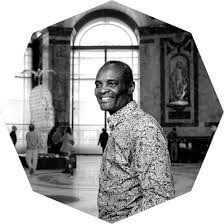 ‘I like to use the color red in sculptures to define the invisible.’

Aimé Mpane Enkobo is a sculptor, painter and installation artist. He trained in painting at the Académie des Beaux-Arts in Kinshasa. He has lived and worked alternately between Belgium and Congo since 1994. His Yebela, a large hand made of wood positioned in a grid, did not only point the Art Zuid adience in the right direction, but symbolised hope.

He grew up in the 1980s and was inspired by the artistic culture of his time; a period of global capitalism, political turmoil, emerging mass media, great differences in prosperity and distinctive music and fashion.

The Berlin Wall would fall and Africa was ravaged by unprecedented famines. New art movements such as Neo-expressionism had a major influence on emerging artists in Europe. Some of those artists include Anselm Kiefer, Jörg Immendorf, Enzo Cucchi, Francesco Clemente and Julian Schnabel. But also Jean-Michel Basquiat, Keith Haring and Kenny Scharf, who developed the graffiti movements and quickly gained international recognition.

In Africa, and especially in Kinshasa, he confronted the population – especially children – with the violence that was going on. Hence, poignant works such as Don’t touch me and The broken dream were created, and sculptures of children’s faces, bruised by life and conflict. Aimé Mpane Enkobo’s work is steeped in social injustice, colonialist legacy, racism and existential questions.

Mpane confronts the intertwined histories of Belgium and the Africa Museum – built by King Leopold II – as a personal showcase for Belgium’s colonization of Congo. A century later, the museum’s focus has shifted from degradation to anthropological celebration with room for contemporary African art.