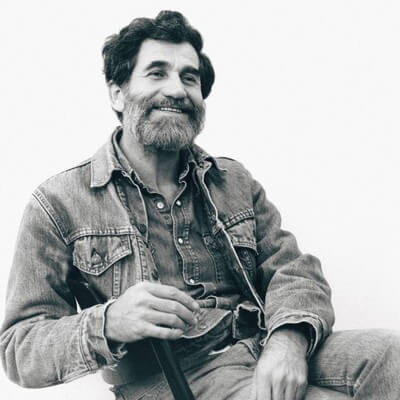 ‘The everyday world is the most amazing inspiration you can imagine. A walk down 14th Street is more amazing than any masterpiece.’

Allan Kaprow was a visual artist, his job titles include: draftsman, painter, photographer, video maker, composer and performer. In the late 1950s he studied composition with John Cage and wrote electronic music. He then became an apprentice to the abstract expressionist painter Hans Hofmann, who would introduce him to Jackson Pollock.

Kaprow was one of the first artists to create an installation as an art form and is known as the “father of the happening”, which he also theorized. The work was a spectacular public event that seemed spontaneous, but was conceived in advance. It was intended to disrupt public order in a playful way and thereby ridicule ideas that were perceived as rigid and old-fashioned.

From 1958, Kaprow organized around 200 ‘happenings’ around the world. With this he had a lot of influence on the Fluxus movement, to which he also contributed.

He made his artworks from perishable materials such as paper and grass. In this way he let the spectator know that he did not attach any lasting value to his work. He demonstrated this almost anti-art attitude in Yard (1961); behind a gallery in New York, he created a junkyard full of tires. The audience became confused: was this rubbish or art?

During ART ZUID in 2011, Fluids was shown, a happening in which an ice wall gradually melts. His first ice wall was shown in 1967 in the tropical heat of Pasadena, California. In his own words, it is rather an idea to do something rather than to leave a physical trace of it. Fluids is about reinvention and multiplication.