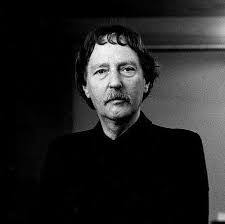 ‘The iron made me; I am closely associated with it. It suits me: it is hard, with great resistance. Only really hard materials can become really soft through handling and processing. (…) A hundredth of a millimeter is a common measure. Nothing has to be vague or unclear.’

André Volten was a sculptor. In 1945 he followed a short course at the Institute for Applied Arts Education in Amsterdam and left for Brussels a year later. There he developed a great interest in abstract art. Back in Amsterdam (1950) he changed from an abstract expressionist painter to a non-figurative sculptor. At that time, Volten worked as a welder at the NDSM shipyard in Amsterdam-Noord; this certainly contributed to this change.

For half a century he worked in the gatehouse of Asterdorp, also in Amsterdam-North. After his death, the building was renovated and in 2016 put into use as ‘Villa Volten’.

After 1954 Volten belonged to a group of sculptors who were intensively involved with the role and meaning of art in public space. This resulted in many of his sculptures in and outside the Netherlands. From the late 1960s, he made many of his sculptures from stainless steel, but he also continued to use granite and Corten steel.

Volten has been of great significance for the integration of visual art in public space. In 1996 he was awarded the Oeuvre Prize of the Fund for Visual Arts, Design and Architecture. Sculptures by André Volten can be found in many museum collections including the Kröller-Müller (Otterlo), Lembruck (Duisburg) and the Kunsthalle (Mannheim).

Volten’s sculptures can be found in many Dutch villages and towns; several in Amsterdam. André Volten’s work was brought to the attention during four editions of ART ZUID. All sculptures are Untitled. The sculpture has been on the Minervalaan since 1995, it is a sculpture from 1962 built from pieces of profile beams. A steel statue from 1961 was on display in 2013. André Volten passed away in 2002.