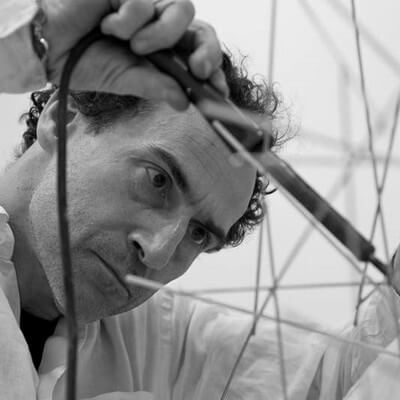 ‘I want to offer a counter-reaction to globalisation and to the fact that our industrial production is being relocated to countries where production costs are lower, while we are left here with bureaucrats, service providers and communications workers.’

Atelier Van Lieshout (AVL) is the Rotterdam-based studio and workshop of and about sculptor Joep van Lieshout (1963). Under his direction, about twenty artists and designers work together on the execution of commissions and free work. Their sculptures balance on the dividing line between art, design and architecture and question the usefulness and role of art.

The oeuvre is very varied: from sculptures to machines, from buildings to furniture, but also designs for utopian cities. It often expresses a fascination for systems: political and economic, the role of the individual in society, the human body. But also those for life and death. A lot of work is made with polyester, but also using bronze, wood and ready-made materials.

Atelier Van Lieshout attracts international attention and has been featured in many exhibitions and is represented in the collections of the major museums. One of the more well-known projects is the AVL-Ville, 2001, a cultural free state in the port of Rotterdam, with its own constitution, a self-sufficient economy, agriculture, medical care, a restaurant, but also its own weapons workshop. The city existed for one year. After that, a number of ‘franchises’ were set up, including a floating restaurant in the port of Arnhem, on the occasion of the sculpture exhibition Sonsbeek 9.

SlaveCity (2005) was a self-sufficient city, where the ‘usable’ people were used to the maximum to generate income and the non-usable people were reused.

In 2012 AVL created the New Tribal Labyrinth, a preview of a possible future. After our resources have been depleted, people are increasingly being thrown back onto themselves. Nation-states are disappearing and giving way to smaller tribes with small-scale agriculture and industry.