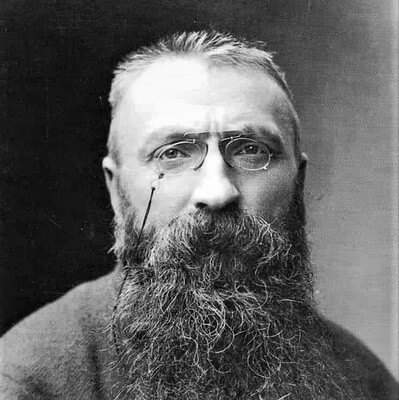 ‘My liberation from academism was inspired by Michelangelo.’

August Rodin was a sculptor, draftsman and printmaker expressing an Impressionist style. As a fifteen-year-old he ended up at the Ecole impériale de dessin. Encouraged by his teachers, he tried in vain to be admitted to the Ecole des Beaux Arts three times. He was refused because his designs were considered too bold.

In those early years he earned money from decorators, who appreciated his skill. The death of his sister in 1862 was the reason for the bronze bust of Pierre-Julien Eymard. Even from so early on Rodin’s originality and strong expression were noticeable.

Two years later he submitted his Homme au nez cassé to the Salon, but it was refused. Despite many artistic setbacks, Rodin persisted and spent eight years in Brussels. A trip to Italy in 1875 marked a turning point in his career. There he was introduced to the sculptures of his icon, Michelangelo.

Back in Brussels, he engaged in a long, often polemic battle against decadent official art. The first result, L’Age d’airain (1876), was admired and encouraged by artists such as Rainer Maria Rilke, Stéphane Mallarmé and Octave Mirbeau.

At the age of forty, Rodin received his first official assignment: Porte de l’Enfer. He worked for more than six years on the two hundred sculptures, including The Thinker and The Kiss. In 1886 the city of Calais gave him a new assignment; this led to The Citizens of Calais (1888).

Rodin’s sculptures are characterized by their irregular surface. The glare that the light creates on them unintentionally give the sculptures a sense of movement. He has created an enormous amount of sculptures, but also many sketches, drawings and watercolors.

The first edition of ART ZUID (2009) showed Rodin’s Le Penseur from 1902. Due to the powerful internal struggle waged by this thinker, the sculpture became an icon for poetry and intellect. August Rodin died in 1917.

In addition to the Rodin museums in Paris and his death place Meudon, Rodin’s sculptures can be seen in museums in the Netherlands (Otterlo, Amsterdam, Laren and Eindhoven), Belgium, France, Spain and the United States.