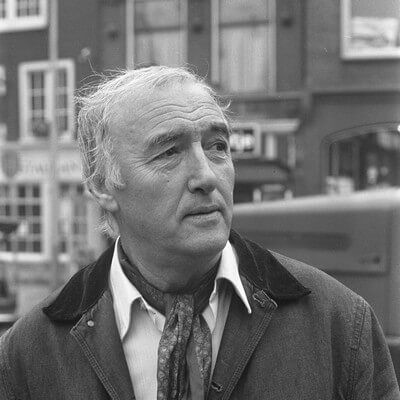 ‘What I’ve made is all a protest against the mess. They talk of the age of the child, but i’ve found a world in which the children don’t play. I made tall, lean figures.’

Carel Kneulman was a sculptor, draftsman and graphic artist, but also a poet and singer. He is best known as the artist behind Lieverdje (1959) located on the Spui in Amsterdam. Primarily he is known as an experimental sculptor. Shortly after the February strike of 1941, he decided to become a sculptor and attended the Rijksacademie voor Beeldende Kunsten in Amsterdam. There he was taught by Jan Bronner, a front-runner in Dutch sculpture, between 1930 and 1960. After that Kneulman went to the conservatory. Later he would become a teacher at the Gerrit Rietveld Academy.

Kneulman felt an association with the Cobra movement, reactively he founded the Group Amsterdam in 1959 together with Wessel Couzijn and others. For a long time he sought a balance between abstract and more figurative art; he said he couldn’t and didn’t want to choose between the two.

He was socially involved and actively promoted the interests of artists. Comparable enthusiasm and fighting spirit are reflected in his expressive bronze sculptures. Various places in the Netherlands have Kneulman’s work in public or museum space: The Hague, Rotterdam, Utrecht, Eindhoven, Vlaardingen, Kampen, Veere and Zeist. Amsterdam also houses the Monument to Gerrit van der Veen and the artists’ resistance, which he made in 1973.

Kneulman’s sculpture group De Europeans (1947) was shown during ART ZUID 2013. It reflects the appalling situation in which Europe found itself shortly after the war. The emaciated figure with the skeleton next to it speaks volumes. This sculpture – and Child (1950) – marked Kneulman’s breakthrough during the leading exhibition in Sonsbeek in 1952. Carel Kneulman died in 2008.