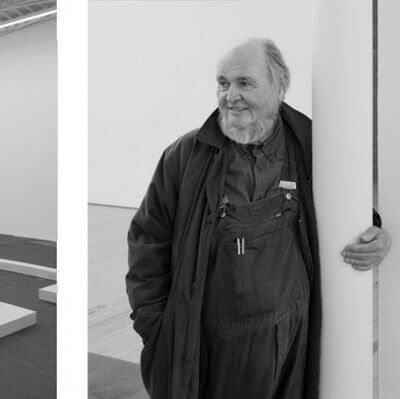 ‘Words have tangible, tactile properties that we feel when we pronounce, write or hear them and that is the subject of my poetry.’

Carl Andre is a sculptor and poet. His works belong to minimal art and he was a participating artist in ARTZUID 2013.

Andre studied at art academies in the United States and Europe but didn’t become an artist straight away. He started his career as an editor, army officer and train conductor.

Since the 60s Andre developed sculptures made of simple, easily obtainable materials. The Black Paintings made by Frank Stella, with whom Andre shared a studio and the sculptures of Constantin Brâncuși served as a great inspiration to Andre’s early works which were mostly wooden and vertical. Andre’s work progressively became horizontal as he became dissatisfied with his earlier work. His most famous work consists of big metal plates which are positioned in a square on the ground. In The Netherlands, these can be admired in the Gemeentemuseum in The Hague, the Kröller-Muller in Otterlo and the Van Abbemuseum in Eindhoven. It’s intended for the visitor to walk around and over the artwork, but this is not appreciated everywhere.

In 1968 Andre was invited to take part in the Documenta 4 hosted in Kassel, he was invited back to the sixth edition (1977) and the seventh (1982). The Documenta exhibitions are hosted every five years and have been viewed as the most important global exposition of contemporary art since 1955.

Carl Andre frequently works with stone. For his Stone Field Sculpture (1977) he arranged thirty-six colossal stones in a grass field. Some of them weigh as much as eleven tonnes. Andre’s fascination with stones can be traced back to his home town, Quincy (Massachusetts) in the United States, where there are a lot of old quarries.