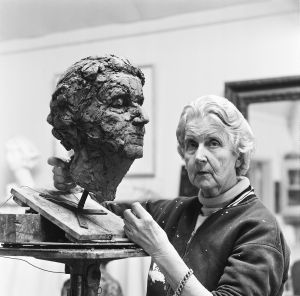 ‘What counts is my job, that is the reason I exist.’

Charlotte van Pallandt was a painter and sculptor. Her creative talents were discovered in her youth; she could draw, paint and play the piano very well. At the time, a career in art was not an obvious choice for a woman. After her marriage ended after four years, she went her own way and started painting.

She would keep doing that until she was thirty. In the meantime she became friends with the painter Kees Verwey and in 1929 she started sculpting. She followed a training course in Paris to develop her sculpting skills. She specialized in portraits and nudes.

In 1953 she made a statue of Queen Juliana and fifteen years later the bronze statue of Queen Wilhelmina. This stands in front of the Noordeinde Palace in The Hague and became widely known. In 1959 she made Fertility, when the east side of the Flevopolder was flooded.

Van Pallandt worked extensively with Truus Trompert as a model. She played an important role in her oeuvre – Van Pallandt made drawings and sculptures of her. She is counted among the “Group of Figurative Abstraction”. In 1980 she was awarded the Singer Prize and in 1992 the Oeuvre Prize BKVB for her entire collection. The Charlotte van Pallandt Prize was named after her, an incentive prize for young sculptors.

During the sixth edition of ART ZUID (2019), two sculptures by Charlotte van Pallandt were displayed. The Reclining Female Figure and the Construction Standing, which she made in 1964 and 1980 respectively.