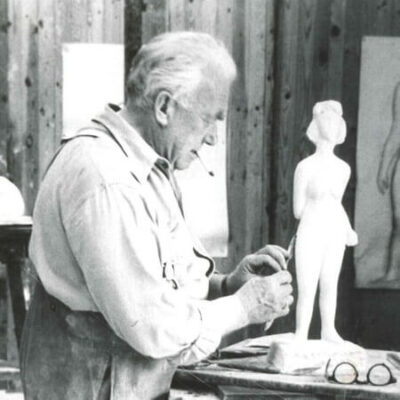 ‘Sculpting is an art for the blind. I struggle with the clay that dries and collapses, with the plaster that breaks and rots, with the baked earth that shrinks, with the wood that cracks. And beware of the specialists in the trade – bronze founders, stonemasons and others.’

Constant Permeke was a sculptor, painter and draftsman. His father was a landscape painter and restorer and  gave him his first art lessons. Permeke went to the Academy of Bruges and then to the academy in Ghent.

Permeke played an important role in the artists’ colony Sint-Martens-Latem and became the most important representative of Flemish expressionism. He was best known for his depictions of sailors, fishermen, their women and landscapes.

In 1911 Permeke was admitted to the annual Salon van Kunst en Present in Antwerp, which brought recognition. In 1914 he was called into the army, he was consequently badly injured in battle and transferred to the United Kingdom. He would come to live there for years and start a family.

Permeke developed his own monumental, expressive painting style. The human figure was put at the forefront of his work. He applied the paint thicker to the canvas and his color palette became more restricted: black, pale gray, green and ocher predominated his oeuvre.

He discovered Cubism and Constructivism and developed friendships that would greatly influence his life and work, including with the sculptor Oscar Jespers. He exhibited in Belgium, but gradually also abroad. In 1928 Permeke settled permanently in Jabbeke, which heralded a productive period.

He received international recognition in 1934 with participation in the Venice Biennale. Three years later he emerged as a sculptor. Initially his style was expressionist, gradually more polished. The Second World War was a dark period for Permeke, both personally and artistically.

During the second edition of ARTZUID (2011), Permeke’s sculpture Marie-Lou was shown, which he made in 1935.

Constant Permeke died in 1952. In accordance with his wishes, his studio and house were opened as a museum.