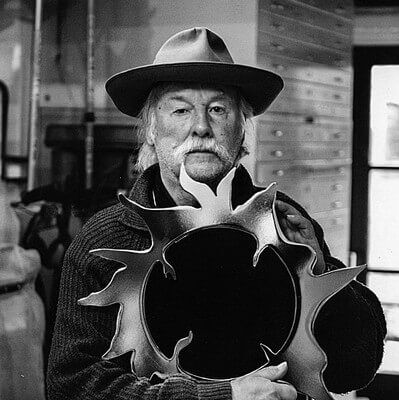 ‘When you start, there’s this fear that you can’t do it; filling the white area.’

Cornelius Rogge is a sculptor, draftsman and installation artist. He was educated at the Institute for applied arts education in Amsterdam – which would later become the Gerrit Rietveld Academy. After that he studied at the National Academy of Visual Arts. Rogge taught at both the Rietveld Academy and the St. Joost Academy for Art and Design in ‘s-Hertogenbosch.

He is an exponent of modern art after the Second World War. His work is present in the most important art museums in the Netherlands. One of his earliest works (1955) is exhibited in Sonsbeek. Two sculptures are in Amsterdam: Wind column in Nieuw-West and Piramide in the South. Rogge’s works are also included in museum collections in Brussels, Paris and New Orleans.

Since the 1970s, Cornelius Rogge has used the motif of a canvas tent in combination with a pyramid shape. To him, a tent is not a foldable shelter for temporary purposes. They are turned inside out and have no entrance or exit. In the 1970s Rogge worked with objects that were reminiscent of archaeological finds from a mythical time. He made them from steel and aluminum, contemporary materials that nod to industry. This double angle remains characteristic of Rogge’s work.

On the occasion of his 45 years of artistry he was appointed Officer in the Order of Oranje-Nassau in 2005.

Shade sculpture, two four-meter high steel sculptures, were on display during ART ZUID in 2017. One sculpture is cut out of the other, which reinforces the duality of the human figures, regardless of whether they are male-female or mother-child figures.