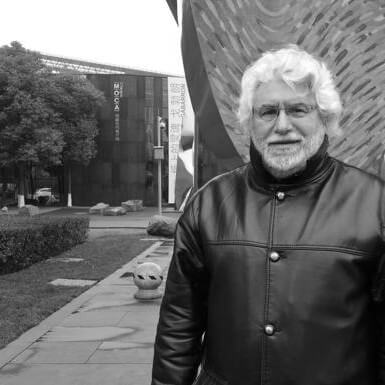 ‘I’ve always wanted to transform things and change them with my hands. My fantasy was always one step ahead. Since then I haven’t stopped my practice, nor my passion for creating art.’

Cristóbal Gabarrón is a sculptor and painter, but also draftsman and engraver. From a young age, he knew that he wanted to paint and initially made figurative canvases of Castilian landscapes. His work gradually moved through informalism towards abstraction. At the age of 22, he made his debut in galleries in New York and Paris.

From 1991 his work was closely linked to sports and Olympic ideals; he received major commissions in this field. Starting with a huge mural entitled History of Olympism. A year later, he was named Sports Artist of the Year.

In 2003 he was named the ‘favourite son’ of his hometown Mula and a park was named after him, which contains statues of him. There is now also a museum named after him. Two years later, eleven sculptures depicting different characters from Cervantes’ work were placed in Manhattan (New York); a contribution to the ‘Tribute to Don Quixote exhibition’.

In the early 21st century, Gabarrón was in charge of the restoration and rehabilitation of a chapel in Medina del Campo – The Chapel of the Millenium. He made murals, sculptures and works of stained glass. His paintings symbolize his concern about the United Nations Millennium Summit, but also the evils that have troubled mankind since ancient times.

During the ARTZUID 2013 edition, Gabarrón’s The mysteries of Columbus I-X, a series of ten colourful images that he had made seven years earlier, inspired by Columbus’ death, was shown. Previously, these sculptures were on display in various places in Spain and New York.