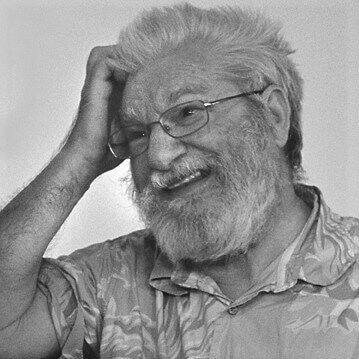 ‘The reason I originally used a mirror was because Jimmy Carter wanted to be eco-friendly, and decided that using a one-way mirror on large office buildings would cut air conditioning costs. (…) It was also an alibi for the company, as they could identify the surface of their huge buildings with the landscape.’

Dan Graham is a sculptor, visual artist, architect, writer and critic. He grew up in New Jersey and ran the John Daniels Gallery in New York from 1964-65. There he staged Sol LeWitt’s first one-man show and organized group exhibitions with works by contemporaries Donald Judd, Dan Flavin and Dara Birnbaum.

At the time, Graham considered himself more of a writer-artist, publishing essays and reviews on music, visual arts and TV shows. His work often focuses on cultural phenomena and is versatile in execution: photography, video, glass and mirror structures and performances.

Perceptions and the psychological processes around them have been of interest to him from the get-go. How do individuals perceive their environment? The shop window is a recurring theme; the window acts as a reflection screen. We not only see desirable objects, but also ourselves in the faint reflection. A doubling that continues on an unconscious level. Body and mind, inner and outer world, private and public are intertwined. A game of appropriation, expropriation and possession arises.

For Graham, a work of art is a way of experiencing yourself. He first used mirrors in his work in the 1970s. Now, his glass pavilions are all over the world. On the one hand these are inspired by classic glass rooms and on the other hand by contemporary architecture.

The Play Pen for Play Pals pavilion is made of steel, glass and mirrors and was exhibited during ARTZUID 2019. It forces us to look at each other and our environment in a different way.