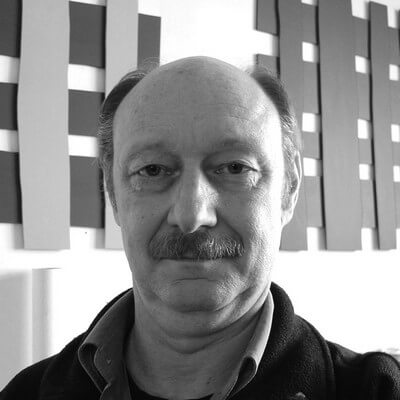 ‘I make art that is not too far from real life. My art is usually very simple; it is easy to look at and to be approached. My works can be very minimal, sometimes they only consist of a few lines. It’s about consciousness and perceiving the world in a fairly concrete way.’

Daniel Göttin is a sculptor, painter and builds installations. He often uses industrial materials for this. He works on the one hand in the tradition of Minimal Art and Arte Povera, on the other in that of American Constructivism. That influence comes directly from Donald Judd, with whom he studied.

Tape is a common material in Gottin’s work; these works are usually temporary. He focuses his design on the specific situation and location. The red carpet Red Circles – Red Frames, which he made for ARTZUID (2019) together with his wife Gerda Maise was characteristic of his style. This being achieving maximum effect was also here with minimal means.

The spaces occupied by the artworks are an integral part of the installation and play a major role in how the viewer experiences them. His work has been featured in more than sixty solo exhibitions and projects around the world.

With Gerda Maise, he founded the experimental exhibition space Hebel_121 in Basel, named after its location: Hebelstrasse 121. It offers artists from all over the world the opportunity to present installations and other works.

Daniel Göttin lives and works in Switzerland, but also carries out many assignments abroad, including in New York, Sydney and Edinburgh. In the Netherlands, he is best known for the installation he made for the Dutch Bank on the occasion of Wim Duisenberg’s farewell.