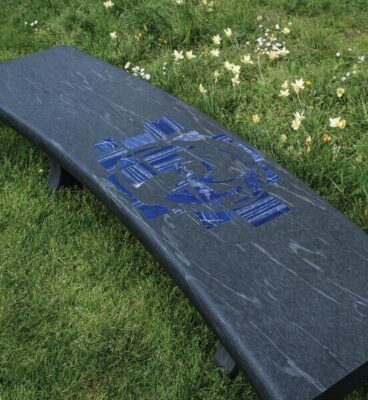 ‘The shape of the artwork does not depend on ideal geometry, but an abstract project that cannot be determined by the technique.’

Domenico Bianchi is a sculptor, painter and draftsman. He studied theatre design at the Academy of Fine Arts in Rome. His work was first exhibited in the Fine Arts Building in New York in 1977- marking the beginning of his artistic career. A year later, a series of exhibitions followed in Rome. This in turn led to many solo and group exhibitions at home and abroad. In 2003 his works were included in the Museo d’arte contemporanea di Roma.

In 1980 Bianchi approached the group of artists- Pizzi Cannella, Gianni Dessi, Guiseppe Gallo and Bruno Ceccobelli. A close friendship and intense collaborative relationship developed. They operated in the wake of the ‘Young Italians’ who breathed new life into drawing and painting and put an end to conceptual art. He became acquainted with a number of exponents of Arte Povera. The leaders of this movement were Mario Merz and Jannis Kounellis. They have served as a great source of inspiration for Bianchi’s work. They would enrich his work with pure, essential values, translated in the simplicity of unrefined materials.

Bianchi’s drawings and paintings evoke associations with hazy landscapes and shadowy visions. His use of colour is reserved; mainly earth tones, yellow and blue. His figures have no direct relationship with visible reality. The material itself is the starting point. His studio is a laboratory in which he experiments with pigments, soil, wax and found objects. Bianchi strives to represent a recognizable universal space. In this respect, he compares his work to music or poetry- disciplines that can evoke new feelings and ideas with minimum means.