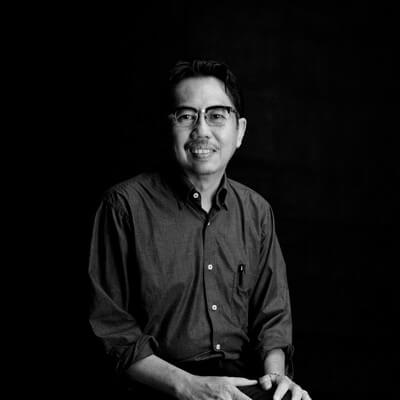 ‘From a physical perspective sculpture is always temporary.’

Eko Agus Prawoto is an architect. In 1985 he became a lecturer in the Department of Architecture at Duta Wacana Christian University Yogyakarta. In Amsterdam he followed a master’s degree at the Berlage Institute, which he completed in 1993.

Prawoto believes it is important to improve the living conditions of the local population. In doing so, he combines local knowledge with contemporary design. According to him the world of architecture must be contextual. That is why he often emphasizes the location of the Indonesian archipelago, which combined humanity and green housing.

For that reason he uses natural, regional materials such as wood, bamboo, natural stone, but has also used bricks, frames and windows. This is not only environmentally friendly, but also lowers construction costs, therefore his homes are also affordable for people with a small budget. His buildings are physical objects but at the same time social entities.

The research that Eko Argus Prawoto conducted into the earthquake resistance of buildings was very significant. In Indonesia there is a preference for modern, concrete buildings, because they represent prosperity. However, Prawoto found that building with bamboo, straw and coconut trees is much better in the event of earthquakes. The 2006 earthquake would ultimately prove his theory.

In 2011, during the second edition of ART ZUID, Prawoto’s work Lung was shown. Art and architecture are mixed together in this temporary bamboo structure. Lung means “sacrifice” in Javanese. The immense work resembles a flower reaching for the sky.

Prawoto has also built the Cemeti Art House in Yogyakarta, which was partly subsidized by the Prince Claus Fund. The open verandas of this house were a direct reference to traditional Javanese architecture, and in particular to its social aspects.