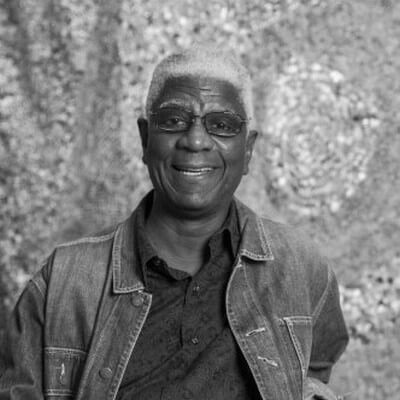 “Migration has enabled me to enrich and widen my art horizon. Because I believe that through it I’ve continued to stumble on greener pastures and new vistas, physically, mentally and spiritually”.

El Anatsui is both a sculptor and an installer. Most of his life he worked in Nigeria. He attended the art academy of the University of Science and Technology in Kumasi, Central Ghana. He then went back and became a lecturer at the University of Nigeria in Nsukka.

There he joined the group of artists of the same name: Nsukka. Anatsui’s sculptures are mostly made of wood, clay and textile. His knowledge of his homeland and the rest of Africa, traditional Ghanaian religions and motifs are important sources of inspiration. With bottle caps (used drink bottle caps) he cites the history of his continent. He found a bag with rubbish and bottle caps in the bushes and then decided to tie them together with copper wire. The resulting installations reminded him of the connection between Africa, Europe and America. After all, Europeans used to bring alcohol to Africa as a bargaining chip, which eventually became an important factor in the slavery trade.

El Anatsui’s installations tell the story of Africa and its connections with consumerism, waste and colonialism. They resemble large draped tapestries and are so enchanting that the viewer often does not assume that and his heavy thinking is behind them.

Anatsui was awarded the Prince Claus Prize in 2009 for the ‘outstanding aesthetic and intellectual qualities of his creations, for his innovative use of materials to emphasize the dialogue between nature and culture, and for his dedicated and inspiring role in the development of the visual arts in Africa’.