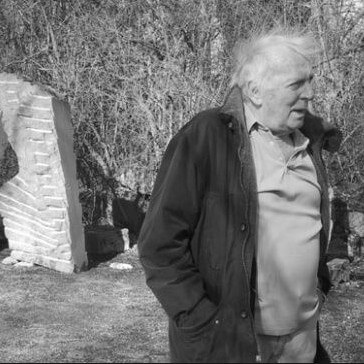 Eugène Dodeigne was a sculptor, draftsman and painter. Dodeigne was born in Belgium and later became French. He comes from a family of stonemasons and learned this trade after primary school. Eager to learn more, he took professional training in drawing and sculpture at the Ecole des Beaux-Arts in Tourcoing and Paris. His first sculptures were made of wood, gradually he started to use stone.

Brâncusi was an inspiration in his early years; he mainly made smooth, abstract shapes. In the 1960s his work became more figurative, expressive and rougher. Giacometti and Richier became his sources of inspiration. His first exhibitions were in 1953 in Lille and Brussels. Around 1960 he had an international breakthrough; his images have been shown in Berlin, Hanover, Rotterdam, Brussels and Pittsburgh. He took part in Documenta 2 (1959) and 3 (1964), in Kassel. His work has also been shown at other major international exhibitions.

In 1964, a stone figure of Dodeigne was unveiled on Broerenkerkplein in Zwolle. In many ways, it is representative of his work and method. The rudimentary human figures distance themselves from the cultivated sculpture. Dodeigne is all about pure primal experience and he limits himself to the most necessary operations. In principle, the image should be right the first time, with as few corrections as possible.

From the 1970s, Dodeigne’s monumental sculptures appeared in the public space of numerous cities. They can still be seen in and outside Europe, such as in Hanover, Middelheim (Antwerp) and Kröller-Müller Museum (Otterlo). His sculpture, untitled and creation year unknown on the fourth edition of Art Zuid, shows that for him the distinction between raw material and the depicted figure is minimal.

Eugène Dodeigne became known to the wider public through his monument on the site of the former Neuengamme outer camp, which was unveiled in June 1989. Dodeigne died in France in 2015.