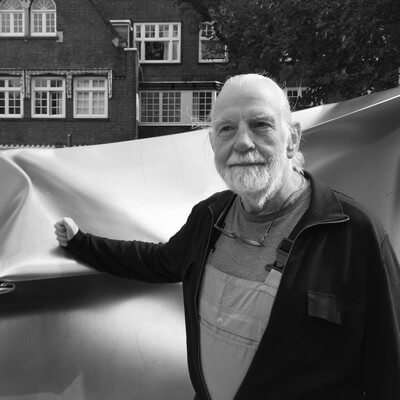 :’I read geometric volumes and determine the conditions under which the air deforms those perfect shapes. Together we transform it into soft-looking, yet powerful sculptures.’

Ewerdt Hilgemann is a German sculptor living in the Netherlands, he makes wall reliefs, installations and sculptures. After studying briefly at the Westfälische Wilhelms-Universität in Münster, he went to the Werkkunstschule in Saarbrücken.

In the 1960s he was awarded work grants that enabled him to work in a printing house and artist colonies. At the time, he exhibited in various places in Europe, before settling permanently in the Netherlands in 1970. For a long time he taught sculpture at the Willem de Kooning Academy in Rotterdam.

Hilgemann’s work from the 1960s focused on wall reliefs consisting of wooden rods and minimalist installations of polyester and steel tubes. Then followed wooden abstract-geometric sculptures, based on grids and cubes.

The 2017 edition of ART ZUID showed Ewerdt Hilgemann’s Cube Structure (1973). It characterized the era, the stack of blocks is minimalist and is structured by the changing light.

The 1980s were a turning point. Hilgemann made his first photographic work, followed by a series of sawn granite boulders: Boulder with 3 Segments (90 °). He uses the coincidence and the power of natural elements. His ‘implosion sculptures’ are created by gradually sucking air from large shapes (often cubes) of stainless steel with a pump. Cubes, square columns and pyramids remain his most used shapes later on.

Many prominent museums have works by Hilgemann in their permanent collection and dozens of objects have found a place in public space in and outside Europe in recent decades. In 2020 the Kröller Müller Museum dedicated a solo exhibition to his work and presented an overview from 1959 to present day.