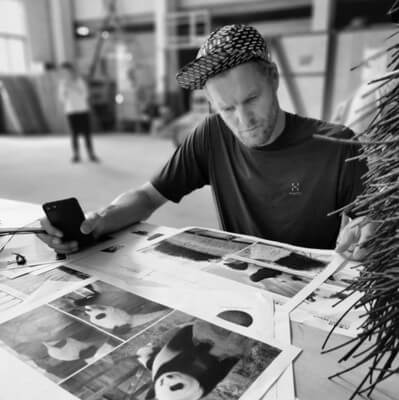 ‘I make sculptures for public space. Where they have to compete with tall buildings, advertising masts, traffic. You have to make something that is immediately seen and grabs people by the throat.’

Florentijn Hofman is a sculptor and attended the Christian Academy for Visual Arts in Kampen. Afterwards he did a master’s degree at the Kunsthochschule in Berlin. Animals play an important role in his work.

Hofman became known with his Rubber Duck, a huge yellow rubber duck with a friendly appearance. The inflatable, floating objects float on an invisible pontoons and are moored in ports. Dozens of ducks were exhibited all over the world, especially in Europe, Asia and Australia. According to the maker, the images have a healing effect. They are apolitical and can soften or clarify global tensions. The first variant of the duck was in 2007 in Saint-Nazaire, it was 26 meters high. The smallest was five meters.

Florentijn Hofman also made a muskrat from straw which was more than thirty meters, a twelve meter high sheepdog from straw bales and 210 paper starlings in the Hortus Botanicus in Amsterdam.

During the first edition of ART ZUID (2009), Rottend Fruit en Wespen was shown. He built a work from wood and paint that depicts decomposing apples, pears and other fruits with wasps above. Until the last moment it remains unclear to the viewer whether the insects prefer the fruit or the visitor.

His Moon Rabbit measured about 25 meters. The rabbit lies on a mound of dirt and stares into the air. The statue is inspired by a Chinese folk tale about a rabbit on the moon. It was only on display for a short time, as it caught fire in 2014, probably caused by sparks from welding machines in use nearby. Nevertheless, the statue attracted more than two million visitors.