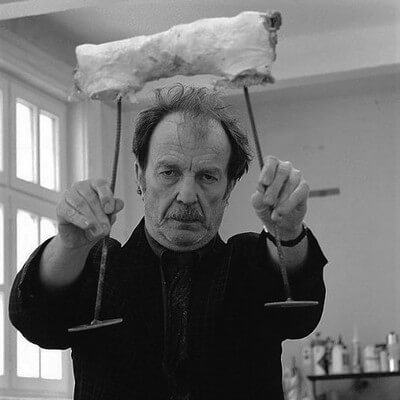 ‘Theories are a kind of over-performance. If you go that way, I guess there’s nothing you can do. It is like destruction. Where something is analyzed with precision it is destroyed; it’s like a dissection.’

Franz West was a sculptor, graphic and installation artist, performance maker and land artist. He often mixed forms with each other. In the mid-1970s he studied at the Akademie der Bildenden Künste in Vienna, but soon left painting and opted for assemblages and installations.

Initially, before his training, he worked with papier-mâché, but later also with polyester. In addition to this he started using aluminum in the 1980s. His Paszstücke were intended as movable sculptures and were exhibited around that time. Later on he experimented with integrating all kinds of furniture into his work. Ranging from sofas and chairs, his exhibition areas looked like lounges.

West built up a considerable oeuvre in thirty years. He is seen as a key figure in late twentieth century European art. In 2009, the first edition of ART ZUID, West’s Sphairos was shown. An imperfect, geometric, convex shape, one and a half meters in diameter, made of car-painted aluminum that appears to float just above the plinth. This too is a “portable” form, in which sculpture goes hand in hand with the performance.