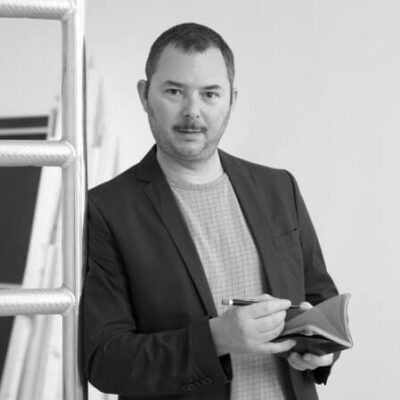 Gabriel Lester is a sculptor, inventor, performer and film director. His repetoir exsists of photography, prose, architecture, installations and music. With Lester it is rarely about one explicit message or one specific idea. His work is rather a proposal for a way in which the viewer relates to the world.

In the mid-1980s he became interested in street and hip-hop culture and made graffiti. Lester started making rap music and performed with his group Utile Connection in the Netherlands, Belgium and Germany. In Amsterdam, where he lived for a few years, he became a spoken word artist. In 1994 he moved to Breda, where he studied audiovisual arts at the art academy Sint-Joost.

After a bus trip to Tblisi (Georgia), he took a course in experimental cinema in Brussels, at the Sint-Lukas Hogeschool. He was admitted to the Amsterdam Rijksacademie through director Carlo Morales. He soon left the cinematic world and started making three-dimensional work. Still cinematography plays a role in this; with frames, decors and illusion as recurring motifs.

Lester’s sculpture Transition 2012 is a round tunnel, half sunk into the ground, with an entrance and exit. The title is derived from the cinematographic term “transition” which means the stitching of scenes and shots together. The work is in the public space; walking through the tunnel is actually performing an act.

During the 2019 edition of ART ZUID, Retroscope, a telescope or binoculars designed by Lester, was on display. Here too he plays with perception. He distracts the viewer’s gaze and invites them to come to their own interpretation and to be part of the completion of the artwork.

Gabriel Lester has been exhibiting at solo and group exhibitions at home and abroad since 2009. He teaches at the Sandberg Institute and the Gerrit Rietveld Academy in Amsterdam.