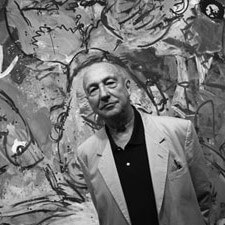 ‘You cannot deny your origin: I love Kirchner more than Matisse, although Matisse was a more significant artist. That has nothing to do with nationality. It’s a stronger feeling.’

More about the artist

Georg Baselitz (Hans-Georg Kern) is a painter, sculptor, graphic artist and draftsman. His pseudonym refers to his place of birth Deutschbaselitz near Dresden, which belonged to the German Democratic Republic from 1949. He studied art in East Berlin, but was expelled because of ‘socio-political immaturity’. He continued his painting studies at a training facility in West Berlin and settled permanently in the West in 1958. In 1961 (the year the Berlin Wall was erected) the pseudonym Baselitz was adopted.

Inspired by André Breton’s surrealist manifestos, he writes his Antonin Artaud-influenced manifestos to accompany his action paintings: Proclamations Against the ‘Glatte und Schöne’, Nacht van Pandemonium (1962) and ‘Why the Great Friends Painting is a Good Painting’ (1966).

In 1963 Georg Baselitz had his first solo exhibition. Two paintings were confiscated by the state because they were said to be offensive. From 1978 to 1983 he held a chair at the Karlsruhe Art Academy. Later he would have a long-lasting professorship at the Art Academy in Berlin.

His work is classified as neo-expressionism; more specifically on the cutting edge of figuration and abstraction. The paintings contain clearly recognizable figurative motifs, although printed by reversal to the second plan, in which the human figure is the central theme.

Baselitz is known for his ‘upside-down’ paintings. He was one of the first to turn against the dominant minimalist abstract art of the 1960s. He was influenced by Edvard Munch and in turn, inspired the ‘New Wild Ones’ himself.

According to Baselitz, a painting does not provide information that the viewer must (or can) absorb; it also does not provide a picture of reality. The work itself is reality. Its value lies in looking at it. Baselitz paints expressively figurative, but not realistic. He works on large formats, alternately wild and modest, rough and refined.