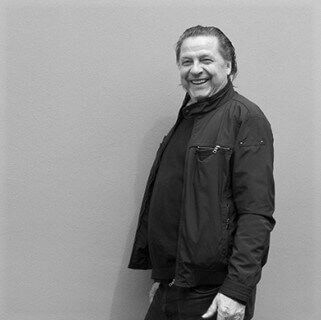 ‘How do you deal with confronting the known and the incredible? For example, people laugh out of shyness or enthusiasm.’

Georg Herold is a sculptor, painter, photographer, video and installation artist. He completed an apprenticeship as an artist’s blacksmith and was educated at the art academy in Halle. In 1974 he left the GDR and attended the Academy of Fine Arts in Munich for two years. He then went to Hamburg, where he graduated from the University of Fine Arts under the supervision of Sigmar Polke.

With a number of others he formed a close-knit group of “provocateurs”, also called enfants terribles or a bad boy group, who embraced the punk movement and flourished in the anarchist spirit of the late 1970s.

Throughout the 1980s and 1990s, Herold was influenced by the work of Albrecht Dürer and the Dada movement. A number of works “allude” to this or are “idiosyncratic provocation”. The ironic tendency of his work leaves room for interpretation. Characteristic of that period of his work is, ‘There is nothing more – There is no law’ (1992).

Georg Herold’s work is experimental and daring. For example, he uses cheap, often second-hand materials traditionally associated with construction, household, clothing and edible purposes. This led to his objects being compared to the Arte Povera. On closer examination, the influence of Joseph Beuys is evident, echoed in Herold’s approach and discussion of political, social and cultural paradigms. There are many references to language and art history in his work.

Blühendes Leben (2009) was the title of Herold’s work that was shown at ART ZUID in 2011. A pink dancer made of slats, screws, wire, canvas and lacquer, resembles a parody of a common title for kitsch paintings. The maker surprises the viewer, who has to decide for himself whether the pose is seductive or not.

Herold had many solo exhibitions in leading museums in Europe and beyond. Since 1999 he has been a professor at the prestigious Kunstakademie Düsseldorf.