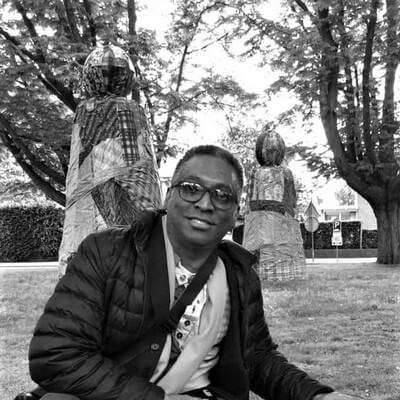 ‘A real artist puts something of himself into his work. You have to make what you want to make- don’t be afraid.’

George Struikelblok is a sculptor, painter and installation artist. He was educated at the Nola Hatterman Academy of Arts and then the Edna Manley School of Visual and Performing Arts in Jamaica. He taught at the Hatterman and is a member of Art 2000, an organization for young Surinamese artists.

Struikelblok’s work is abstract, but he has not completely let go of figurativeness. Fixed themes in his paintings, which are coloured in earth and pastel tones, are love and death. A common, simple male figure represents his father who died before George was born. The father-death theme is reflected in his watercolors, paintings, sculptures and installations.

George Struikelblok exhibited in Suriname, the Netherlands, Guyana, Jamaica, Trinidad, Brazil, Switzerland and the United States. In 2015 he opened his gallery/educational center G-Art Blok in Paramaribo. His autobiography The Struggle to Success was released in 2016; when he hadn’t even reached his mid-forties.

On the occasion of the 30th anniversary of Suriname’s independence, he created thirty Tip Tip Monuments that commemorate 94 Javanese contract workers. Who arrived in Suriname after a long, arduous journey in 1890. Upon arrival they were put to work on a plantation by the Nederlandsche Handelsmaatschappij. Many slaves would follow until the end of 1939 – some 33,000 all together. They brought slippers made with a wooden sole and a rubber band over it: called the teklé. Later this luxury item was called Tip Tip and made a national symbol by artists.

Struikelblok’s three meter-high sculptures Kotomisi, were shown at ART ZUID 2019. It is a tribute to the Afro-Surinamese woman. The different ways in which the sculptures fold their angisa (head covering) represent the moods of those who worde them or important hidden messages.