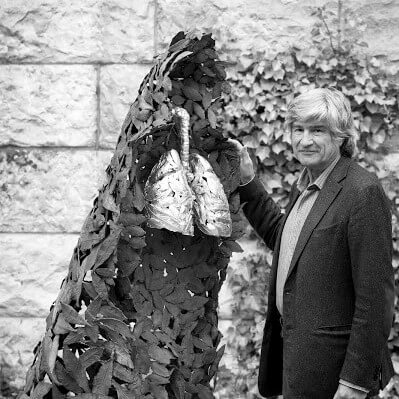 ‘It is the job of a sculptor to reveal the latent image in nature.’

Giuseppe Penone is a sculptor. Between 1960 and 1968 he studied at the Academia Della Belle Arti in Turin. Immediately after completing the training, he held his first solo exhibition there.

He is a representative of two schools of thought; land art en arte povera – the Italian variant of minimalism, of which he would become the youngest representative. Penone comes from a farming family and worked a lot in nature in his early years. Forests, rivers and prehistoric caves coloured his youth.

Natural materials are preferred materials used in his installations and sculptures. His work is about how people relate to nature, to stone, wood, clay, trees and plants. He is interested in the growth process, but also in the more spiritual side of nature. Penone makes ceramic objects and subsequently casts them into bronze sculptures. His sculptures refer to the mysticism of nature: flow, transformation, growth and erosion. Many of his works show the transience of man.

He alternates his iconic works and space-filling installations with intimate sculptures and drawings. Trees in particular hold a special place in Penone’s oeuvre, both as a subject and as a material. He casts bronze into tree bark, transforms leather into the bark and records annual rings. He shows growth processes that often remain invisible to the human eye.

Penone took part in several editions of Documenta (Kassel, 1972, 1982, 1987 and 2012). In 2010 Museum De Pont in Tilburg had a retrospective exhibition of Giuseppe Penone. Many museums in the Netherlands and abroad have included his work in their collections.

In 2013, ART ZUID showed Lo Spazio della Scultura (The space of sculpture). Penone’s two-meter-high sculpture of a tree trunk, a 200-year-old cedar cast in bronze with sporadic branches stemming from it. As if he turned back time.