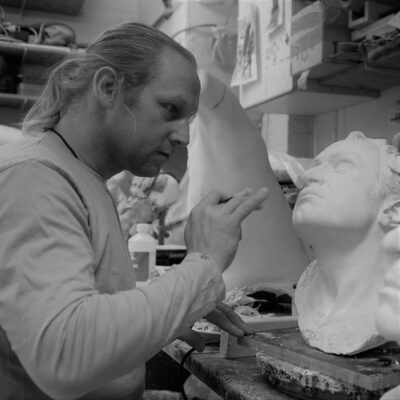 ‘Only when there was an audience for my work, I dared to call myself a visual artist.’

Guido Geelen is a sculptor and lives and works in Tilburg. There he followed the teacher training (for drawing, crafts, and textile work forms) and then the Academy for Visual Education.

Geelen mainly works with clay. He creates sculptures full of contradictions: order and chaos, strict and baroque, traditional and industrial, simple and complex, art and kitsch. Many of his sculptures are made up of clay reproductions of various objects: from car tires to vacuum cleaners, from televisions to urinals. The soft clay objects have been pushed into a box and are thus formed into rectangular blocks. Geelen builds huge walls from these blocks. The whole thing looks chaotic and neat at the same time.

Despite his unusual application of ceramics, Guido Geelen refers to traditional forms and functions of pottery. He uses traditional as well as industrial techniques. Sometimes he glazes his work. He reuses discarded molds from the industry and so-called transfers – decals with which images are printed on pottery in pottery factories. He uses kitschy images of flowers, animals, and ships in his work. At the end of the 1980s, Geelen made vases that seem to be constructed from Delft blue tiles, with pierced holes.

Guido Geelen was awarded several times; for example, in 1988 he was awarded the Encouragement Prize for applied art from the Amsterdam Fund for the Arts, a year later both the Charlotte Köhler Prize and the Swiss Vordemberge–Gildewart Prize. After that, the Dr. AH. Heineken Prize.