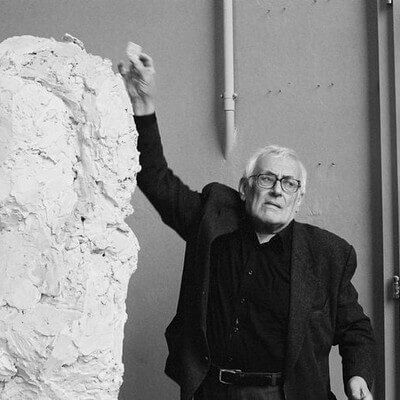 ‘Observing is most important.’

Hans Josephsohn was a sculptor. After high school, he left his hometown of Königsberg to study in Florence. His Jewish background and the political situation at the time, forced him to leave Italy again in 1938 and go to Zurich. There, the traditional sculptor Otto Müller accepted him as an apprentice in his studio.

In 1943 Josephsohn moved into his own studio, but it would take until 1964 for him to exhibit and gain fame. In that year he obtained Swiss citizenship. It wasn’t until the late 1980s that he broke through internationally. Josephsohn’s first major exhibition was in 1992 in Giornico, Switzerland. Since then, thirty of his sculptures have been shown here. In 2002 the Stedelijk Museum in Amsterdam presented a retrospective exhibition of his. A year later he was awarded the Kunstpreis der Stadt Zürich.

Josephsohn’s sculptures seem like assemblies of different viewpoints on the same subject. Body parts do not have realistic anatomical proportions, but are often emphasized to enhance the expressive power of the subject. This process often results in the figures losing their frontality and the viewer is invited to experience the work by moving in a circle, without a correct point of observation.

In the Kesselhaus in St. Gallen, Josephsohn’s works are on permanent display in temporary exhibitions. The artist moved into this space (studio, bronze foundry and exhibition space) in 2003, at 83 years old. This was followed by exhibitions in Cologne, Paris, Frankfurt am Main, London, New York and Zurich.

In 2015 three sculptures by Josephsohn were shown at ART ZUID. All images were untitled and all three half figures were not worked out in detail. They are all slightly off balance and seem to enter into a wordless conversation.

Hans Josephsohn died in 2012 in his hometown Zurich.