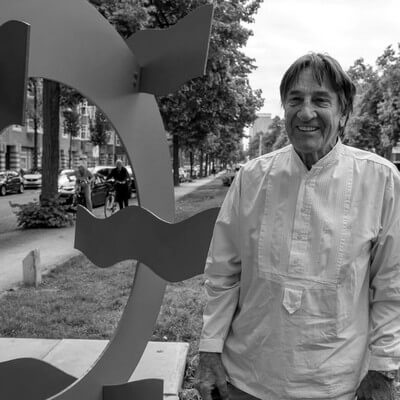 ‘Artists understand that our work has a value beyond money, and I like to see it foster positive feelings in others.’

Hans van de Bovenkamp is an American sculptor born in the Netherlands; at the age of twenty, he migrated to the United States. During his freshman year at the University of Michigan, he was a student of the sculptor Richard Jennings. For three years he studied with Joseph Goto, a sculptor and master welder. He became known for his large abstract works in bronze, stainless steel and aluminium. Nature, symbols and myths have had a great influence on his work.

Van de Bovenkamp was part of the avant-garde Tenth Street scene, a supporter of abstract expressionism. His first solo exhibition took place in New Mexico in 1962. Soon after, he designed sculptural ideas for the windows of Tiffany’s on Fifth Avenue, New York. In 1966 he was commissioned to design a copper fountain in Manhattan together with his brother Gerrit. Soon after, he started making more fountains, initially in limited editions. Gradually, with fifteen assistants, they would make 5000 worldwide. More commissions for public space work followed, such as Mariner’s Gateway on the Hudson River.

Van de Bovenkamp started his sculpture series Menhirs in 2001. These consist of stacked, balanced shapes. His design was influenced by boulders and stones from Stonehenge, England, the Baths in Virgin Gorda, protected areas and desert landscapes worldwide. At Twin Oaks Farm he renovated a horse farm into a house, studio and gallery and created an accompanying sculpture garden.

His work has been shown worldwide, including in Italy, Lebanon, Slovakia, Venezuela, Switzerland, Texas and China. In museums, embassies, universities and public gardens. His sculptures are also in private and corporate collections.