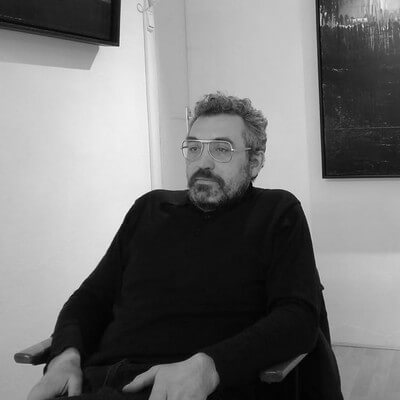 ‘We think too much and feel too little: we need humanity more than machines. More than cleverness, we need kindness and gentleness.’

Harold de Bree is a painter, art installations builder and a performance artist. He studied at the Royal Academy of Visual Arts in The Hague, where he lives and works. His work contains social elements, but at the same time shows a preoccupation with weapons and military objects: full-size aeroplanes, bunkers, tanks and guns. His objects connote danger, are rugged, heavy, ominous, dangerous and colossal.

For example, during a performance, he invited the audience to shoot crooks and cowboys in a shooting gallery for a glass of whiskey. De Bree’s work is abundant and clear. His work can be interpreted as a literal repetition and reconstruction of history, but also as a new form of anti-art. At first glance, the viewer accepts the work for what it is, but on closer inspection, the concrete disappears and a mysterious atmosphere follows. Initial clarity gives way to uncertainty, answers turn into questions.

De Bree’s images are modern icons that awaken a mixture of feelings, desires and memories in us. They radiate purism and sobriety. For example, a sauna in public space is reminiscent of an army barracks. It leaves the visitor doubting whether the resort can be left intact.

For the pond of the Kunstmuseum in The Hague, he recreated a real life-size submarine, based on technical drawings he found on the internet. Later he would make a Bailey bridge for the same museum that, as part of the performance, went up in flames. Partly because of the environment, the sculptures of Harold de Bree acquire an absurdist meaning. His objects arouse the sensitivity and fear of terrorism, insurrection and war.