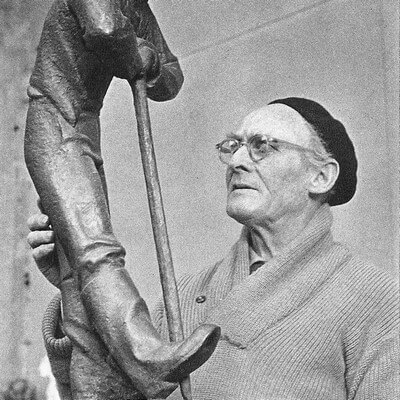 ‘After Paris I got my first assignment: two panelled stones on the Mercatorplein in Amsterdam. I made the heads of Mercator, a noted geographer, and Joan Blaeu, a map printer.’

Jan Havermans was a sculptor, painter, draftsman and graphic artist. He was a member of the artists’ association De Brug and the Dutch Circle of Sculptors.

Together with Paul Citroen and Charles Roelofsz, he founded the Nieuwe Kunstschool in 1933, the first private school in the Netherlands, which embraced ideas about the function of art as formulated by the Bauhaus style. The school was a counterpart to the Institute for Applied Arts Education (the current Rietveld Academy), which was then known as quite conservative. The Nieuwe Kunstschool would exist until 1941. Havermans taught drawing and sculpture there.

In 1924, Havermans took care of the cover of the sculpture issue of Wendingen magazine, with work by Hildo Krop, Johan Polet, Theo Vos, John Rädecker and others.

Five years later (1929) his statue Minerva was unveiled at the Apollolaan in Amsterdam. The idea of starting another art academy was conceived there, but it was never realized. Now the Hilton hotel is located there. The statue was stolen in 1985, but found again in 2017. Two years later the sculpture was highlighted during ART ZUID. Seven years after the liberation, the Resistance Monument was also put on the Apollolaan, at the spot where in 1944, 29 prisoners from the House of Detention on Weteringschans were shot. Three life-sized men radiate determination, grimness and resignation.

Other war memorials that Havermans realized were placed in Renesse, Halfweg and Amsterdam-Noord (Tuindorp-Oostzaan). Reliefs by his hand are in Alkmaar (1931 and 1935), The ‘resting horticulturist’ at Jan van Galenplantsoen (1938) and ‘The resting athlete’ at Minervaplein in Amsterdam, made in 1941, placed ten years later.

In 1962, his statue of ‘The Construction Worker’ was unveiled on the corner of Burgemeester de Vlugtlaan with Burgemeester Eliasstraat. Jan Havermans died two years later.