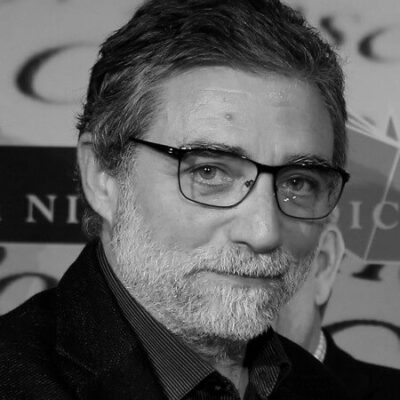 ‘Sculpting is not just about mass and volume. It is about something that resides deep within us and that doesn’t surface without sculpture. We have one foot in reality and the other in the unknown. This contradiction reflects the riddle in life.’

Jaume Plensa is a sculptor. He studied at the Escuela de la Llotja and then at the Escola Superior de Belles Arts de Sant Jordi in Barcelona. He then attended the Henry Moore Foundation (United Kingdom) and the Atelier Alexander Calder (France).

Plensa held his first exhibition in Barcelona, ​​where he lived and worked. He gained worldwide fame with his meter-high sculptures of women’s heads in public space. The sculptures have their eyes closed and offer a meditative appearance. He has carried out more than thirty major projects in cities such as Dubai, London, Nice and Tokyo. In Chicago, the faces of hundreds of residents were on display: in the Crown Foundation Millennium Park.

In 2015 Plenza had a much acclaimed exhibition in the Basilica di San Giorgio Maggiore during the Venice Biennale.

Plensa’s sculptures were shown three times during ART ZUID. In 2011 Grand Latent Blanc was exhibited, it depicted a hunched figure in a relaxed position. Viewers are left wondering whether it is a yoga pose or the fetus position. A series of his sculptures was shown in 2015: namely Heart of Trees. It consists of seven seated human figures made of bronze, each embracing a tree. Duna was also shown, an immense woman’s head made of steel. In 2019 Sanna was exhibited, one of his characteristic elongated granite women’s heads. This young girl represents repentance and tranquility, in an increasingly hectic society.

When Leeuwarden was the Cultural Capital (2018), Plensa’s Love was one of eleven fountains, one for each of the Frisian cities. Plensa’s work has been exhibited in various galleries and museums in and outside of Europe.