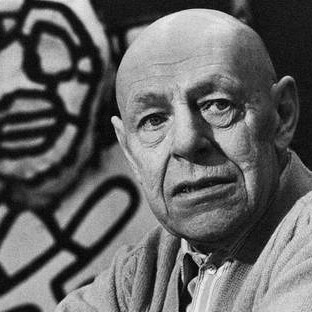 ‘Real art always pops up where you least expect it.’

Jean Dubuffet was a sculptor. In his hometown of Le Havre, he attended the art academy, he left for Paris in 1918. After six years, he gave up his artistic aspirations to run his family’s wine business. During the war, he turned his back on the business and returned to the arts.

Dubuffet initially painted in a wild style, using not only paint but also broken glass and asphalt. His first exhibitions took place in 1944 and 1946.

He did not believe that what he was looking for – spontaneous imagination and originality – could be found in the official art circuit. That art was too learned, too thought through and too much preformed by traditions. He sought art from “misfits” who worked unimpeded by traditional concepts of beauty and independent of commercial galleries.

He found this in the drawings of children, mentally impaired people and prisoners. He built up a large collection of these and called this art- art brut. Later his own work and that of his followers were also referred to by this term.

In the 1950s he painted figures, cityscapes and landscapes. His Tableaux d’Assemblages series consisted of coloured canvases, which he cut into pieces and then stitched them together again as a mosaic. During that time he gained international fame; retrospective exhibitions took place in Paris and New York in the early 1960s.

The 1960s brought about a change; his work became more three-dimensional through the use of plastics. The time of separate objects arrived, in addition to the paintings with relief that he continued to make. Commissions for theatre sets and major public works would follow.

His 1973 Tour Ballerine was shown at ARTZUID in 2011 and is an example of his Hourloupe style: whimsical patterns in colourful colours with white and shaded areas. Dubuffet died in Paris in 1985.