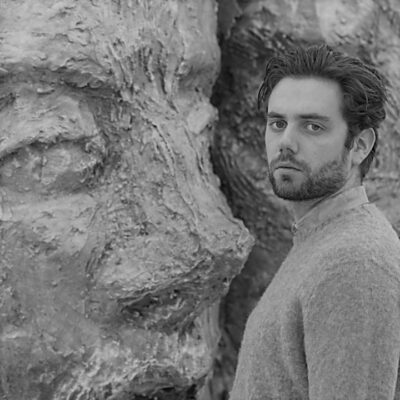 ‘I consider the dromedary to be an animal that sits between a dinosaur and a goat. Poetically, I try to confuse its definition by making it a mirage.’

Jean Marie Appriou is a sculptor who lives and works in Paris. His parents were sculptors and set designers. He grew up in Brittany, an area known for its fertile breeding ground, cliff coasts and medieval legends. Appriou’s sculptures poetically reshape species. The artist carved out models from clay and foam to cast in aluminum, highlighting the tool marks and fingerprints of his tactile process.

The works’ whimsical textures and silvery surfaces create a dynamic play of light and shadow as we move around them, emphasizing the hallucinatory qualities of their composition and imbuing them with a dreamy energy.

At the entrance to Central Park, New York, Appriou’s huge horse sculptures stand as surreal sentries. The artist was inspired by the nearby horses that pull tourists through the city in carriages. He was also inspired by Augustus Saint-Gauden’s gilded monument to William Tecumseh Sherman, on horseback, on the Grand Army Plaza.

Appriou’s work has previously been exhibited in Paris, London, Oslo, Vienna, Brussels, Zurich, Cologne and New York. His work is part of leading international collections of both museums and private collectors.

ARTZUID showed two large sculptures of his in 2021: The Big Watcher and The Big Traveler, both from 2019. The two dromedaries seem to float on a blistering layer of air in the hot desert. They are a direct reference to Romantic Orientalism that emerged in the 19th century.