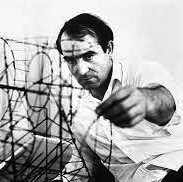 ‘Everything moves, everything has to move, but because it moves, it also wears out. Ultimately, the movement destroys itself; still, movement is better than standing still.’

Jean Tinguely was a sculptor, painter, draftsman, photographer and installation artist. During the Second World War he studied at the Applied Arts School in Basel. At the end of the training he started to experiment with moving objects.

In the 1950s he played a major role in the development of kinetic art, where everything revolves around movement. He made wire sculptures and reliefs, with which he imitated the work of artists such as Klee, Malevich and Miró by setting their works in motion. He made interactive drawing machines (Métamatics), wildly dancing installations made from scrap metal & waste and all-black sculptures with an eary militaristic feel.

The constructions have no meaningful functions. Tinguely powers them with motors, making the parts spin and toss around- the parts are clearly seeking support when moving, stamping and grinding. The machines are rooted in the Dadaism movement.

Jean Tinguely was disappointed in the world, in Swiss precision and the constant hunt for economic returns. Partly for this reason, he presents waste as art, hoping to turn it into something cheerful.

In 1960 he moved to New York and organized international happenings together with Raoul Rauschenberg and others. In 1964 he made the installation Heureka, after Archimedes who shouted “I found it” when he lowered himself into a bath and understood that the buoyancy of his body is equal to the weight of the amount of water displaced. Tinguely’s sculpture resembles something between a spaceship and a steam locomotive.