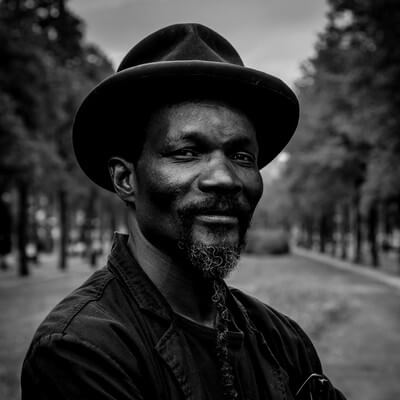 ‘Wood is fascinating, vibrant, warm and present. It makes it possible to play with shapes, it facilitates confrontation between volume and empty space, the

Jems Robert Koko Bi is a sculptor, draftsman, installation builder and performer. He lives and works in Essen, Germany. In Düsseldorf he studied at the Academy of Arts after winning a scholarship to study in Germany. Before that he studied Spanish history at the National Higher Institute of Arts and Culture Action in Abidjan (Ivory Coast).

Koko Bi was largely influenced by the 1980s – an era when global capitalism, political unrest and global mass media set the tone.

In 1996 he had his first exhibitions in Abidjan. Wood is by far his favorite material, which he saws and burns. His work is figurative, but also abstract and conceptual in nature. In his own words, he does not work to change the world, he does not oppose history, but takes the lessons that can be learned from it to heart. He accepts the place where he is staying.

In 2008 he stood out with work resolutely denouncing events in Darfur. His sculptures attracted viewers with their humanistic message. With that, his sculptures become anecdotal. It is not just about the victims in Darfur, but more generally about all victims of unjustified violence.

ART ZUID showed Koko Bi’s Mandela 27,000 pieces of life history in two editions (2013 and 2019). It is a tribute to Nelson Mandela in the form of a wooden head four meters in diameter and seven meters high.

Koko Bi’s works have been exhibited in many different places around the world: from France and Germany to Cuba, from Senegal to Canada.