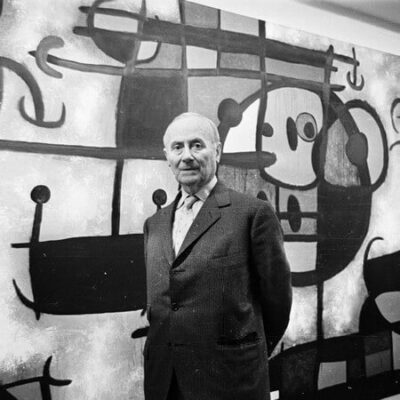 ‘If there is unintentional humour in my work, it probably stems from the need to escape the tragic side of my temperament. Life seems absurd to me.’

Joan Miró was a sculptor, painter, graphic artist and ceramicist. He studied art in Barcelona. In 1920 he left for Paris, where he took lessons at the Académie de la Grande Chaumière. Miró made friendships with Pablo Picasso, Max Ernst, Hans Arp and René Magritte.

He fell under the influence of Cubism. Like Georges Braque and Picasso, Miró never continued this movement to complete abstraction. His forms always refer to concrete reality, or as it exists in our dreams.

His meeting with André Breton, the founder and theorist of Surrealism in 1925, would be of great significance. Although Miró would never join any movement, not even Surrealism, Breton did call him “the greatest surrealist of all”. Shortly afterwards he would design sets and costumes for Sergej Djagilev’s controversial Ballets Russes with Max Ernst.

At the outset of the Spanish Civil War, Miró fled to France; four years later (1940) he returned to Spain for good. In 1954 he received the prize for graphic art at the Venice Biennale; then many more awards would follow.

In the 1970s, Joan Miró made the series The Hope of the Condemned Man, in which his experiences with war and violence manifest themselves. Together with Picasso and Dalí, he is part of the big three of Spanish modern art. Several museums in Europe and the United States own his work.

During the second edition of ART ZUID (2011), Miró’s Femme et oiseau (Woman and bird) was presented. He made the bronze statue in the year before his death. Joan Miró died in 1983.