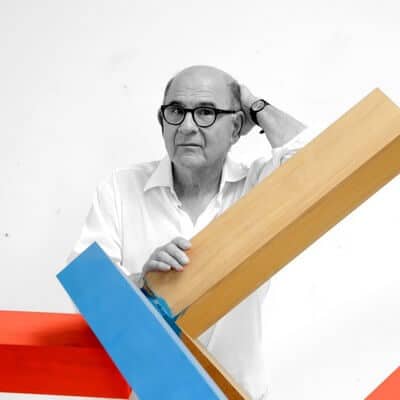 ‘Conceptual art seemed very illustrative and pedantic. I thought my problem was to describe an emotional state, my own desire. My work was small, but ambitious, it was much more abstract.’

Joel Shapiro is a sculptor and draftsman. He studied art at New York University, the city where he grew up and still lives and works. His works are recognizable, based on simple rectangular shapes of abstracted human forms. This makes him a representative of minimalism. This is reinforced by giving his works the designation Untitled.

A trip to India and acquaintance with the sculptural tradition there would prove decisive for his approach to sculpture. Shapiro has been researching space, volume, surface, and openness versus closedness all his life as an artist. This gives his sculptures an expressive power. Gradually, Shapiro’s work developed from extremely abstract to forms in which human figures are visible.

In Shapiro’s work the boundary between abstract and figurative is blurred. Prominent minimalist sculptors such as Carl Andre, Donald Judd and Richard Serra were his examples. Joel Shapiro’s work is a bit more playful and colourful.

Well known is Loss and Regeneration, a 1989 statue that was placed at the United States Holocaust Memorial Museum, not far from the National Mall in Washington. Joel Shapiro has long led a somewhat secluded life and is reserved with the media.

In 2019, Shapiro’s sculpture Untitled edition no. 3/3 was presented during ART ZUID. A balancing or dancing human figure can be recognized in the abstract bronze sculpture.