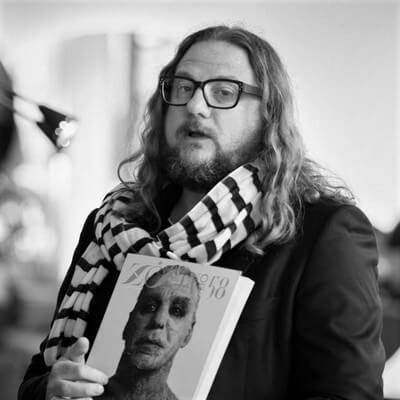 ‘Ultimately, it’s about people. I can only examine myself to the best of my ability and report on it. This way I hope that my subjective research becomes something more objective.’

Johan Tahon is a sculptor. He says he always has been. He studied sculpture at the Royal Academy of Fine Arts in Ghent. In 1995 he was discovered by Jan Hoet, director of the current S.M.A.K. Who invited him to participate in the exhibition The red gate.

After his breakthrough in 1996, invitations to participate in exhibitions at home and abroad followed. Museums in Antwerp, Eupen, Ghent and Ostend bought his works, as did museums in The Hague and Amsterdam. The city of Oudenaarde bought a sculpture of his for their market square.

More commissions followed, such as New Seismo at the Ministry of Finance in The Hague and Fluïdum 2006/2007 for Museum Beelden aan Zee in Scheveningen. Hanover, where Hitler burned down the synagogue in 1938, is now home to Twins, one of Tahon’s most intruiging sculptures. It is a monument which exudes reconciliation and apology.

Tall human figures made of plaster are his signature. Sometimes they have one head, sometimes two. During a visit to the Pergamon Museum (Berlin) he became fascinated by mythical animal figures. He called the lion-like animals that he started to make leonides.

He casts statues in bronze for public spaces. For years he worked with polyester; in recent years he has been experimenting more with smaller ceramic works, which he bathes in a white glaze after completion.

Johan Tahon’s sculptures Pilar I & Pilar II, Fin and Petrine (for Colin) were exhibited on the Apollolaan during ART ZUID 2019, the works balance spirit and matter. Body parts have been placed uncommonly or left out altogether.