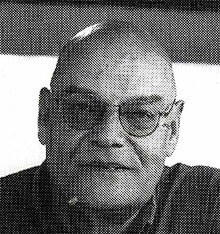 ‘Life today is only the result of the tragic divorce between economics and aesthetics.’

Joost Baljeu was a sculptor, painter, architect, graphic designer and publicist. He was educated at the Institue for Applied Arts Education in Amsterdam (1943-45) and started his career as a painter. Baljeu initially made realistic landscapes, cityscapes and still lifes. In 1950, like many artists back then, he became inspired by international renewal movements dating back to before the war, an example being cubism. Consequently, his work became more abstract. He was predominantly influenced by the artists of De Stijl with their geometric-abstract design language. In 1954 he made his first design on relief for a community centre in Amsterdam. The requested design had to mirror the union of architecture, painting and sculpture. He followed a method that Piet Mondriaan and Theo van Doesburg had previously used and became fascinated by the architectural applications of reliefs. From that moment on he gave up painting. In 1965 he made his first constructivist abstract wall sculptures, consisting of coloured surfaces. In 1957 he mounted the surfaces at right angles to each other to enhance the spatial character of his works.

Baljeu was also inspired by developments in France, wherein the fifties artists made spatial colour constructions. An example being the works of Jean Gorin of the Groupe Espace; a loyal disciple of Mondriaan. Gorin had first met Mondriaan in 1926 and became friends with him. He had remained true to Mondriaan’s idiom; neoplasticism. Baljeu, in turn, met Gorin twenty-six years later in Paris. Their friendship brought Goring to Amsterdam several times, including in 1967 for a retrospective exhibition in the Stedelijk Museum.

From 1957 to 1972 Bbaljeu was a teacher at the Royal Academy of Art in The Hague. Various museums have his work in their collection: for example the Mondriaanhouse in Amersfoort and the Kröller-Müller Museum in Otterlo. His sculptures are in public spaces in The Hague, Zoetermeer, Dordrecht and Amsterdam, among other places.