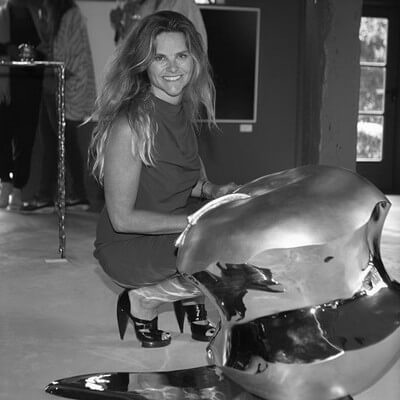 ‘Starting a sculpture in wood, clay or stone helps to empower the emotion as it resembles the resistance I encounter in real life.’

Judith Wiersema is a sculptor. After training as a nurse and studying psychology, she discovered her true passion in 1995: sculpture. She completed the Gooische Academy for Visual Arts and started her own studio and school with Janko Bergman.

Wiersema prefers to work without models- so she is working solely from her perception, knowledge and creativity. She makes her sculptures from bronze and aluminum, in which mainly feminine shapes and attitudes are expressed. What starts figuratively leads in some cases to almost abstract forms. They are mostly torsos, of women but also of men.

Wiersema made a Barbie series, based on the doll figure. To her, Barbie is just a doll and not a competitor to real women. She wants to confront viewers with her work, amaze them, shock them and force them to experience emotions.

In 2019, the sixth edition of ART ZUID, curators Jhim Lamoree and Michiel Romeyn invited the artist, which led to the placement of The big leg, in the Cornelis Schuytstraat in Oud-Zuid. The work is a more than seven meter high, high-heeled female leg in black bronze.

Wiersema has exhibited her work in the Netherlands, Europe, South Korea, China and the United States.