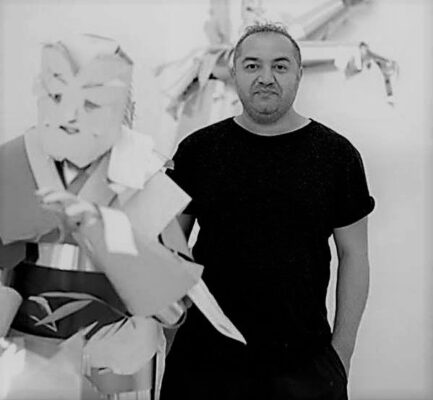 ‘I think it’s important that people can see how I work and that they can ask questions.’

Karen Sargsyan is a sculptor who does not work with bronze or stone, but with paper. He was born in the Armenian capital Yerevan and fled his homeland in 1998, seven years after Armenia gained independence from the Soviet Union. He came to the Netherlands as a sports teacher but picked up his love for drawing and painting again in the asylum seekers’ center. Karen Sargsyan lives and works in Amsterdam. Thanks to his immense talent, he was admitted to the Rijksakademie, which he attended in the period 2006-2007. In that period, he won the Thieme award, the Art Amsterdam prize for young, promising visual artists.

Sargsyan works with paper and aluminum and transforms sturdy three-dimensional, layered sculptures with a box cutter and glue gun. The result is colorful characters, who often refer to history, art, or literature. They seem to be frozen in their expressive movements.

Karen Sargsyan’s paper sculptures are life size and always wear a mask over their costumes. Often the artist uses pastel shades; gradually his use of color also became more expressive. It leads to swirling and marionette-like figures that are simultaneously vulnerable and strong. Many of his sculptures have their arms raised to heaven – they often refer to the ancient carousel of human existence.

In 2021, three aluminum sculptures from 2017 by Karen Sargsyan were displayed on the Apollolaan during ARTZUID. ‘Marry with the West’ was one of them. The sculpture ‘Wolfgang without a wig with a magic flute’ is reminiscent of a break dancer and refers directly to Mozart’s Zauberflöte. ‘Golden Cockerel’ goes back to Rimsky-Korsakov’s opera of the same name and Pushkin’s fairy tale in which a tsar is tired of wars against his neighbours.